In the last couple of years, Junghans has focused on expanding upon their Meister line of watches, bringing out some incredible watches. The Meister line seems to be at the core of the Junghans brand and where they are going, though for a time was limited to dressier designs. They riffed on the Max Bill line the brand is so well known for, but skewed more classic. That said, they had a distinct look and a very modern execution that made them unique and appealing. A quick look at our review of the Meister Kalendar Moon model will make that apparent. 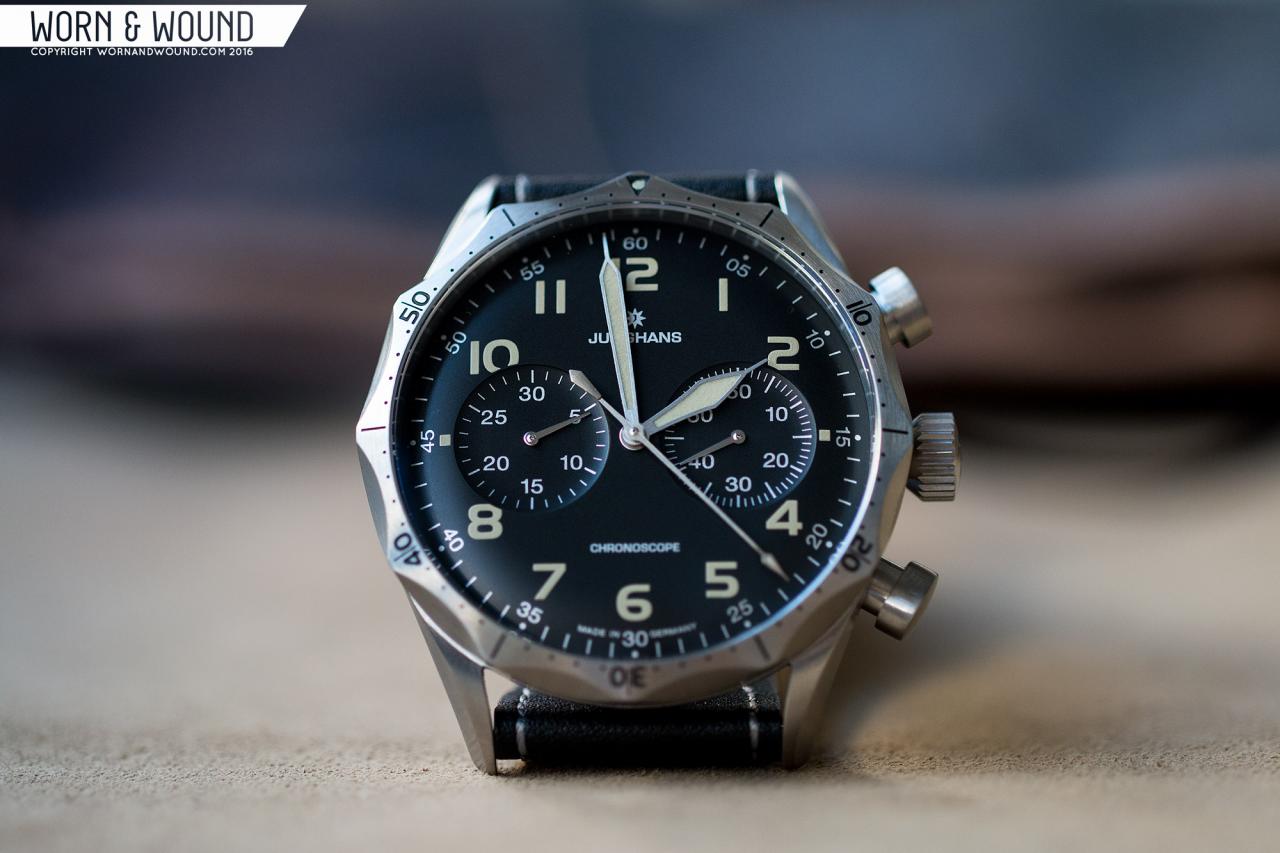 From there, Junghans started playing with the format, releasing watches that utilized some of the aesthetic cues of the dressier pieces, but went in different thematic directions. For example, there is the Meister Telemeter, a stunning chronograph that was inspired by early-mid 20th century designs and features a striking dial. Then at Basel 2016, they showed their new Meister Driver range, which as the name suggest draws from automotive sources.

Today we’re going to take a look at a watch that is the biggest departure from the series, but a welcome addition, the Junghans Meister Pilot Chronograph. Like the Telemeter, the Pilot draws on the past, in this case from a watch they made in 1955. Designed and issued to the newly-established Bundeswehr, the watch featured a unique bezel, dual-register layout and Junghans in-house column wheel movement, the J88. Though perhaps lesser know than watches like the Heuer Bund, the originals are still wildly collectible and exceptionally rare.

Though Junghans has pulled inspiration from this watch before, the new Meister Pilot Chronograph draws closely on the elements that made that design so interesting. In particular it has that same bezel made larger and more prominent, a similar military inspired dial and angled lugs. Yet, at the same time it’s not a 1 for 1, having a firm root in their modern watches as well, and a modern size at 43mm. Powered by the J880.4 movement, which is likely an ETA 2892 base with a Dubois Depraz 2030 (unconfirmed, but based on the J880.3 should be) and featuring a sapphire (!) crystal, the Meister Pilot comes in with a price tag of $2,465. The watch is available in two versions, vintage and classic (the former featured in this review), which indicates the lume and strap color.

The case of the Meister Pilot is simply a work of machined art. It’s sculptural with flowing lines, unexpected curves and fantastic finishing, making it great to view from all angels. Coming in at 43 x 49.5 x 14.5mm, it’s a sizable watch to say the least, but feels right. Some of this is from the proportioning of the dial, spacing of sub-dials, etc, but also because of the design of the watch. With all of the curves and undercuts, the larger size helps show every detail off. It’s bulky for sure, but when it’s on your wrist, you just don’t care.

Looking at the watch from above, you already have a lot to take in. First, is that stunning bezel; the signature design detail that dates all the way back to the Bundeswehr chronograph from 1955. The all steel bezel features deep scalloped-grooves for grip, giving the top surface a dramatic star-like shape. The bezel index follows the scallops, filling larger spaces with numerals, and smaller spaces with marks, all in printed black. The bezel is bi-directional and non-ratcheting, but is still one of the nicest bezels I’ve felt. It has a proper amount of resistance, requiring some strength to turn, but not too much, and a perfectly smooth feeling as it rotates. It just screams quality machining. 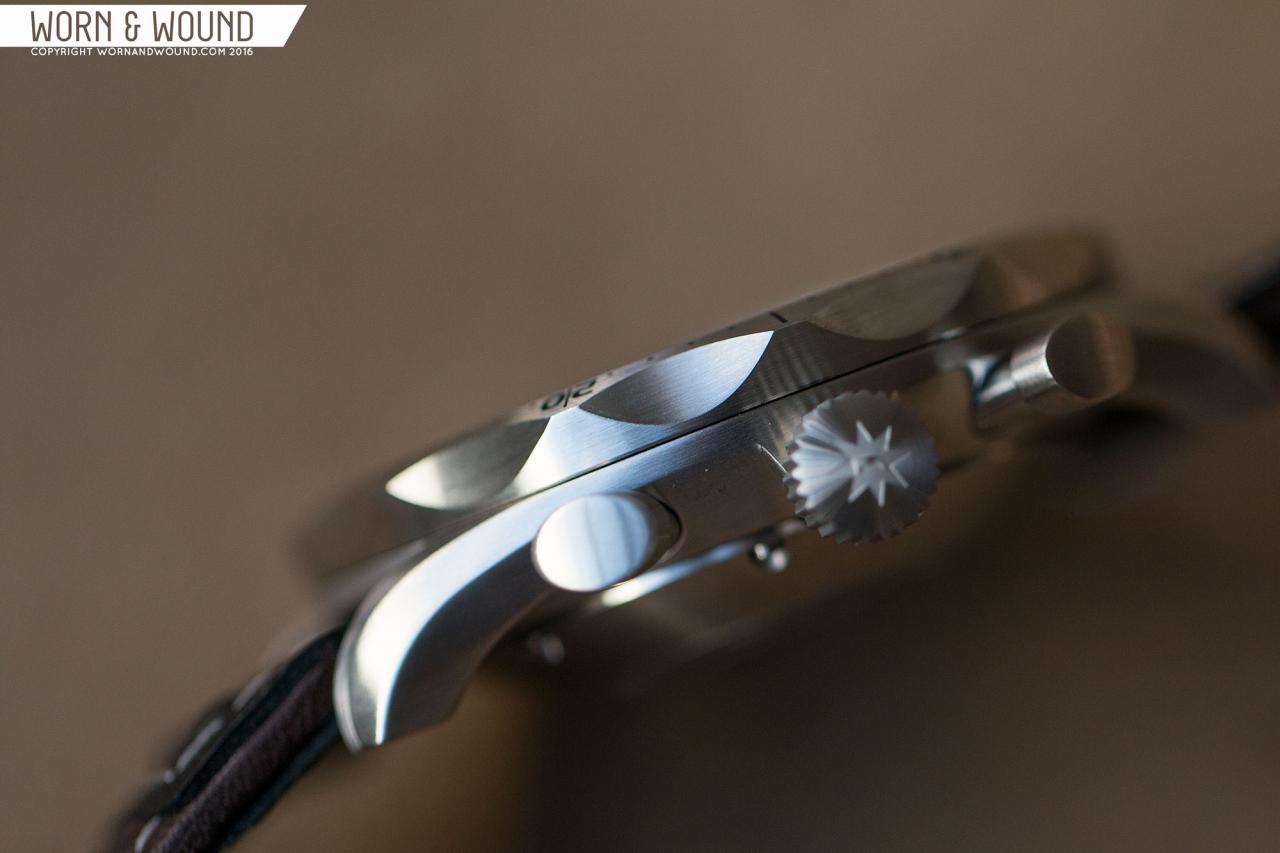 Still from above, the lugs have an atypical shape that too pulls from the 50’s design. The lugs curve in, creating a wider space before straightening out at 21mm for the strap. The effect is subtle, but cool, continuing the flow of the midcase through the lugs, adding some aerodynamic lines. The lugs also feature a bevel on their outer edge, building on the complexity of the geometry.

From the side, the shape of the case is more fully revealed. Here, you can see the Meister lineage in the design, though this case is far more rugged and detailed than other, dressier versions we’ve seen. The case is bowl shaped overall, which does help mitigate the height a bit, as sloping sides feel less severe. The sides lead up to the bezel, which is also quite tall. From the side, the scalloped grooves are more visible, and simply gorgeous, each perfectly brushed. The lugs then provide a dramatic line that cuts through the case, riding above the pushers and crown. 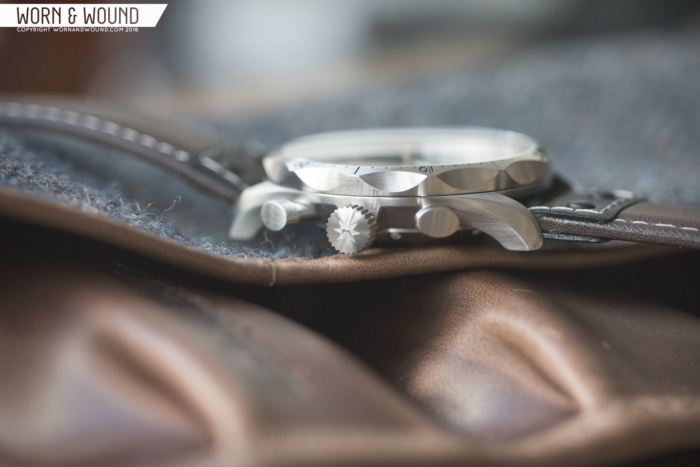 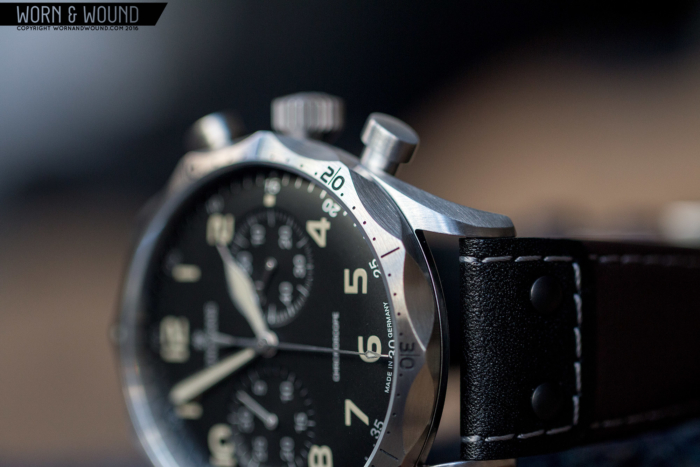 Flipping the watch over, you have a solid case back that is held on with several screws. In the center is a star design rendered in matte and polished surfaces, with a few details about the watch. My favorite aspect of the back is actually that you get a more exposed view of the pushers and crowns. As expected, the watch features pushers at 2 and 4 and a crown at 3. The pushers are ovals, providing a nice surface to push. They sit on top of long pistons that protrude from the midcase, just behind the lugs. At first, it would appear as though the whole piston moves, though in actuality, the oval pusher is a cap that goes over the piston. The crown is then a sizable cylinder with deep teeth from grip. Because of the case shape, the crown tapers before meeting an extension that comes out of the midcase, which has a cool, architectural look. 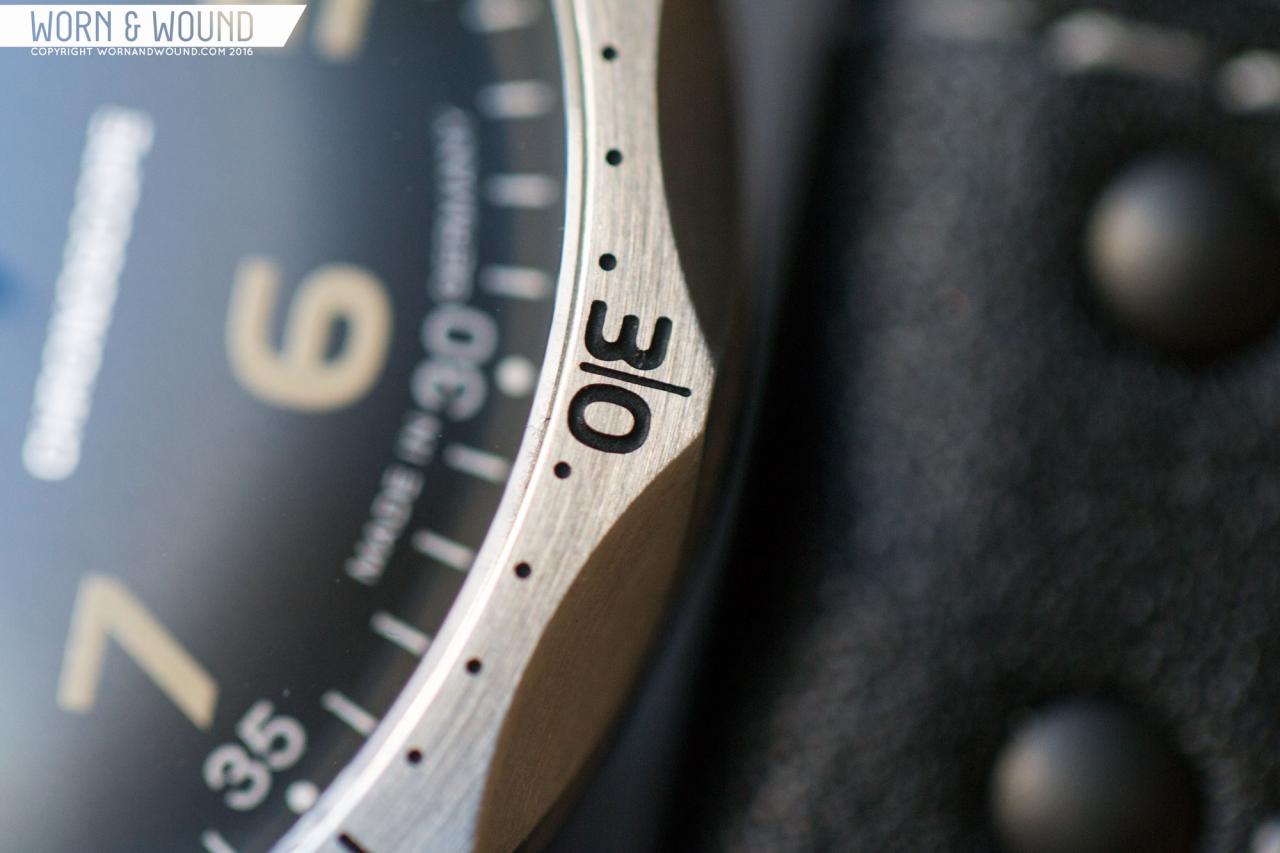 The last thing worth mentioning is the finishing. The case is entirely brushed, but done so masterfully. The surfaces feature noticeable grain, for a rugged look, but still very sharp lines between each facet. The brushing direction then changes various times, so on the top of the bezel its circular, but in the bezel grooves its horizontal. Similarly, on the lugs the top surface has straight brushing, while the bevel is on an angle. It just looks great.

Considering the Junghans Meister Pilot Chronograph is based on a watch from 1955, it feels as new and innovative as any watch I’ve seen recently. Sure, there is some vintage flair, but the bold design and sculptural lines are so complex and unique that it feels like a fresh concept. Compare this to other aesthetic-minded pilot’s watches and chronographs and it really stands above the competition. Throw in that it’s well-built and beautifully finished, and it’s in a class of its own. 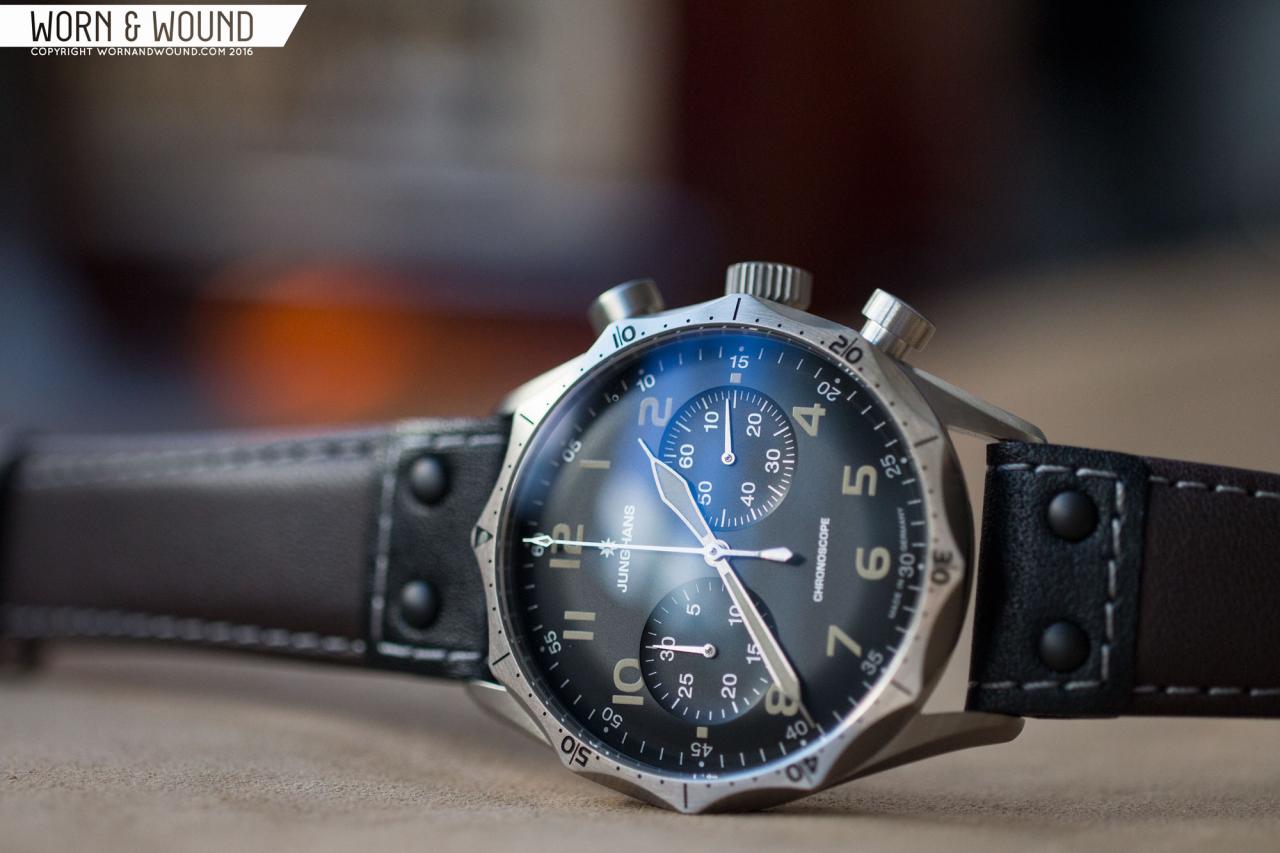 Coming in with a price tag of $2,465, the Meister Pilot isn’t inexpensive, but it’s not overpriced either, comparing in quality to watches that cost far more. German-made watches by Junghans and a few others are priced fairly, even if that price is a bit above your pain threshold. That said, the Meister Pilot is at the top of the Meister line, likely due to the increased complexity of the case and finishing. In the end, I think the Meister Pilot truly stands out in the current market, offering a riff on the pilots watch that no one else is. For people who are looking for such a watch, or have just been waiting for a Junghans with a sapphire, this is the watch to consider.