I even have not any plans for buying a watch when the family and I went on vacation to Las Vegas in early September. I expected to look at a lot of them that were far, far outside my price range, but that would be it. Just some harmless window-shopping. Plus, my Alpina Startimer GMT chronograph would be enough to keep me company the few days we were there.

And then I walked into the Swatch store in the New York, New York and walked out a few bills lighter and with a new watch on the wrist.

Honestly, Swatches have never done it for me in the past. I grew up during the time when they were at the height of their popularity. But in the mid-1980s, I was wearing digital Casio watches that to me were way cooler than anything Swatch had on display. The plastic build and colors didn’t appeal to me as a teenager, and even less so now many years later. Even the inaugural Sistem51 collection, released in 2013, was largely a pass for me. Admittedly, a very cool watch with an even cooler movement, but I just couldn’t get onboard with the plastic cases. 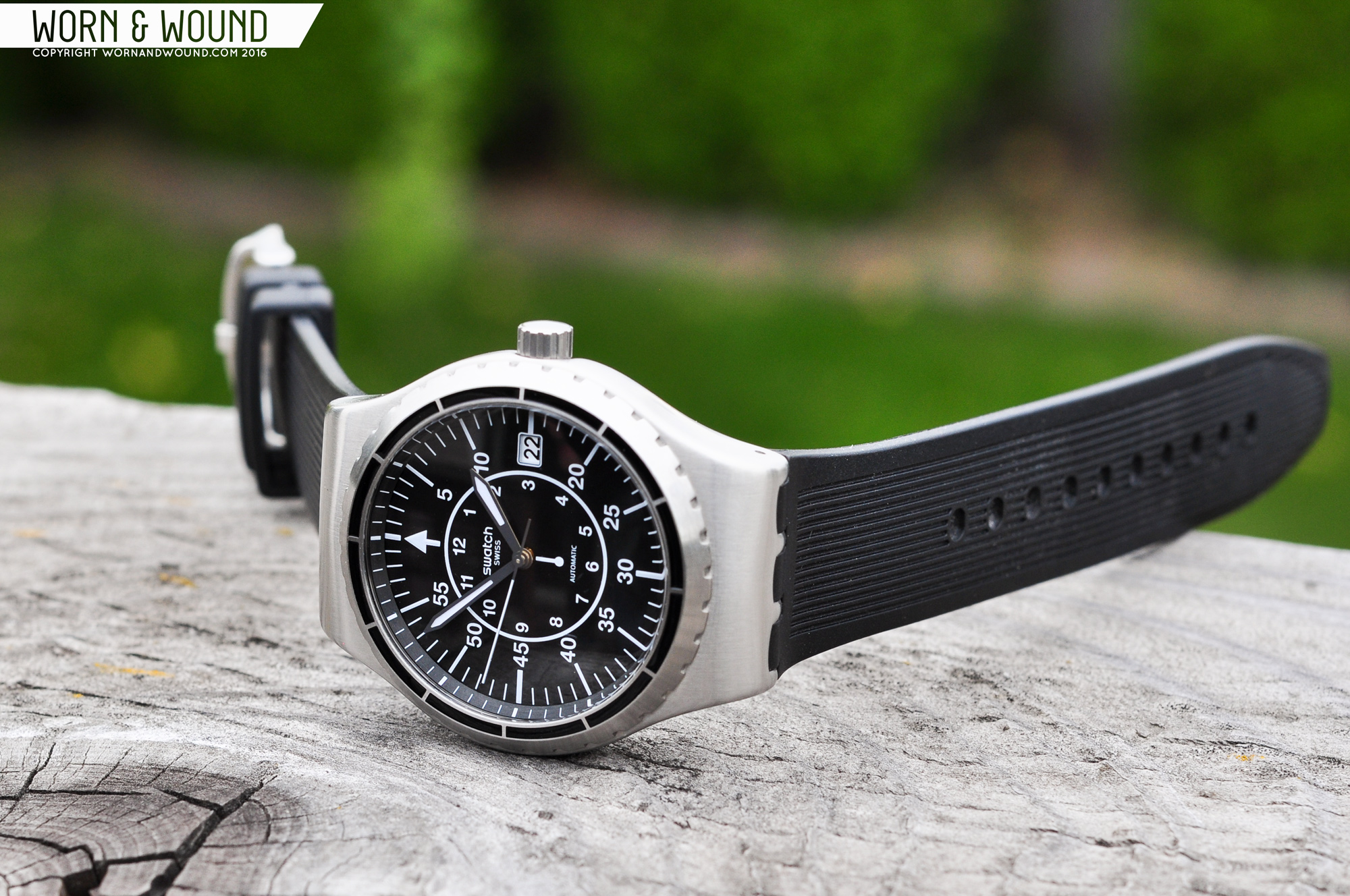 The Sistem51 Irony collection changed that. Swapping plastic for steel, the watches finally started to make sense. They were a touch more elegant, a bit more mature, and seeing them in the metal brought the whole thing home.

All of the variants were present at the Swatch store. I liked the subdued styling of the Earth and Fly models, and the Tux was decent looking for a two-tone dressier watch, but ultimately not for me. The one that really caught my eye, however, was the Irony Arrow. Right away the Flieger Type B design spoke to me (just shouting, “buy me!”). It was simple, a little bit more serious than the rest, and it also fit nicely on the wrist. And the price was reasonable, even at full retail. Since I had not bought myself a new watch in quite a while, it felt right to pick up a little treat.

Running through the specs, the stainless steel case of the Arrow measures 42mm in diameter, 13.8mm in thickness and has a length of 50.6mm. The case has an interesting lug design. From the top, it looks like a shroud, but from the bottom one can see Swatch’s proprietary lug system. It features a three-tang end that unfortunately limits aftermarket options beyond a handful of sources.

Taking a closer look at the case, the next feature to draw the eye is the bezel. It’s raised like a diver’s bezel and is notched like it should be gripped and turned, so you’d be forgiven for thinking that it’s functional. But it’s not; it’s fixed to the case. Moving closer to the dial, there’s a ring of black running along the bezel, with a cutaway at every five minutes. There’s very little reason for this bit of design, other than it looking good and framing the dial. 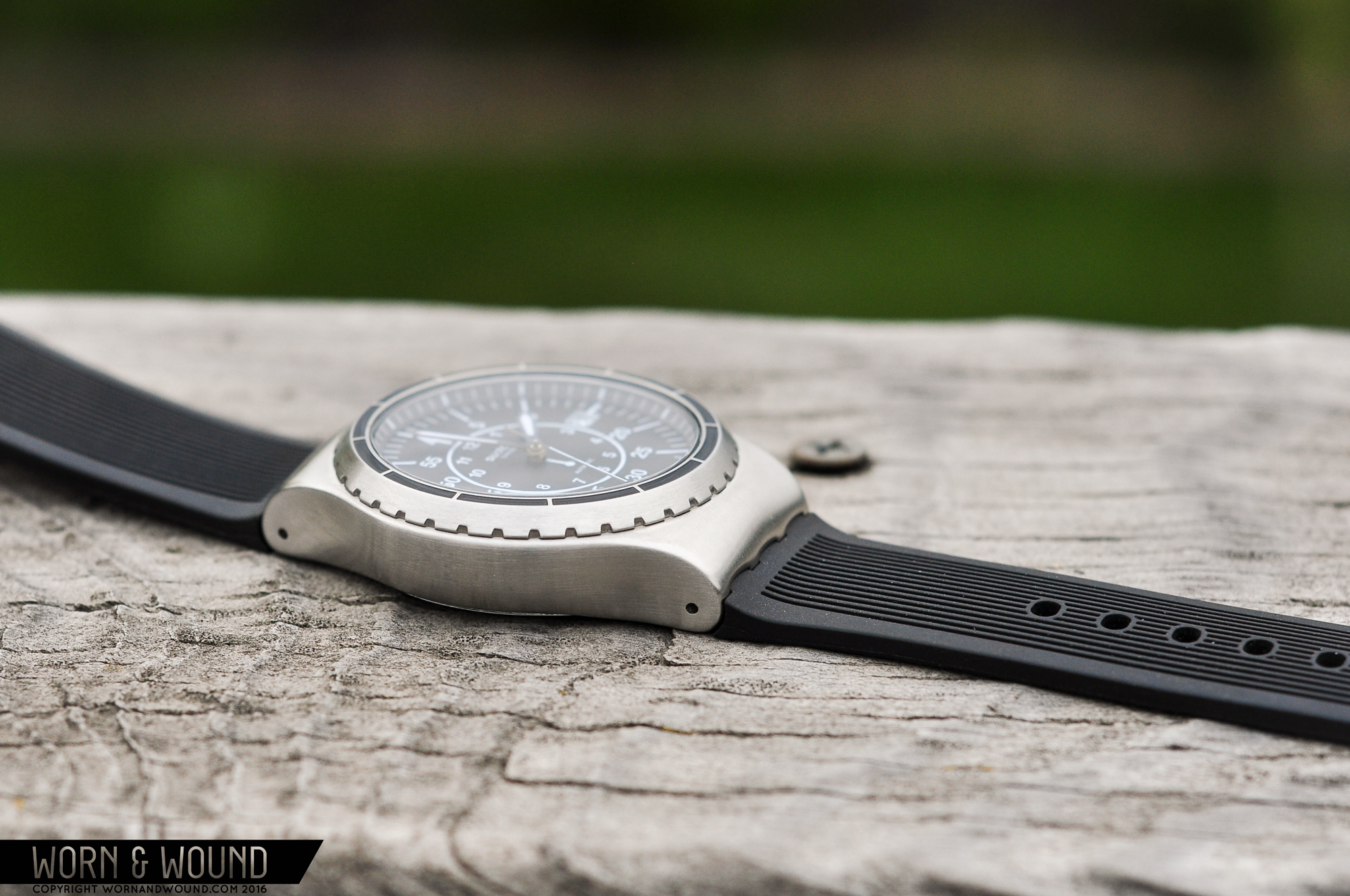 The Sistem51 Irony case has a water resistance rating of only 3 ATM, which puts it squarely on dry land. The crystals on both ends are plastic, which is totally understandable at the price point. Fortunately, plastic crystals can be polished should the need arise.

Flipping the watch around, you can see the movement that spawned the line. It’s undeniably cool looking with its unique checkerboard pattern, and it’s entirely machine-made consisting of just 51 parts anchored to a central screw. Further specs include 19 jewels, a beat rate of 21,600 bph, and a whopping power reserve of approximately 90 hours. Also of note is that the Sistem51 movement can now be serviced, whereas the plastic version of the watch is permanently sealed and ultimately disposable if it happens to break. This upgrade extends the lifespan of the watch and really elevates its value. 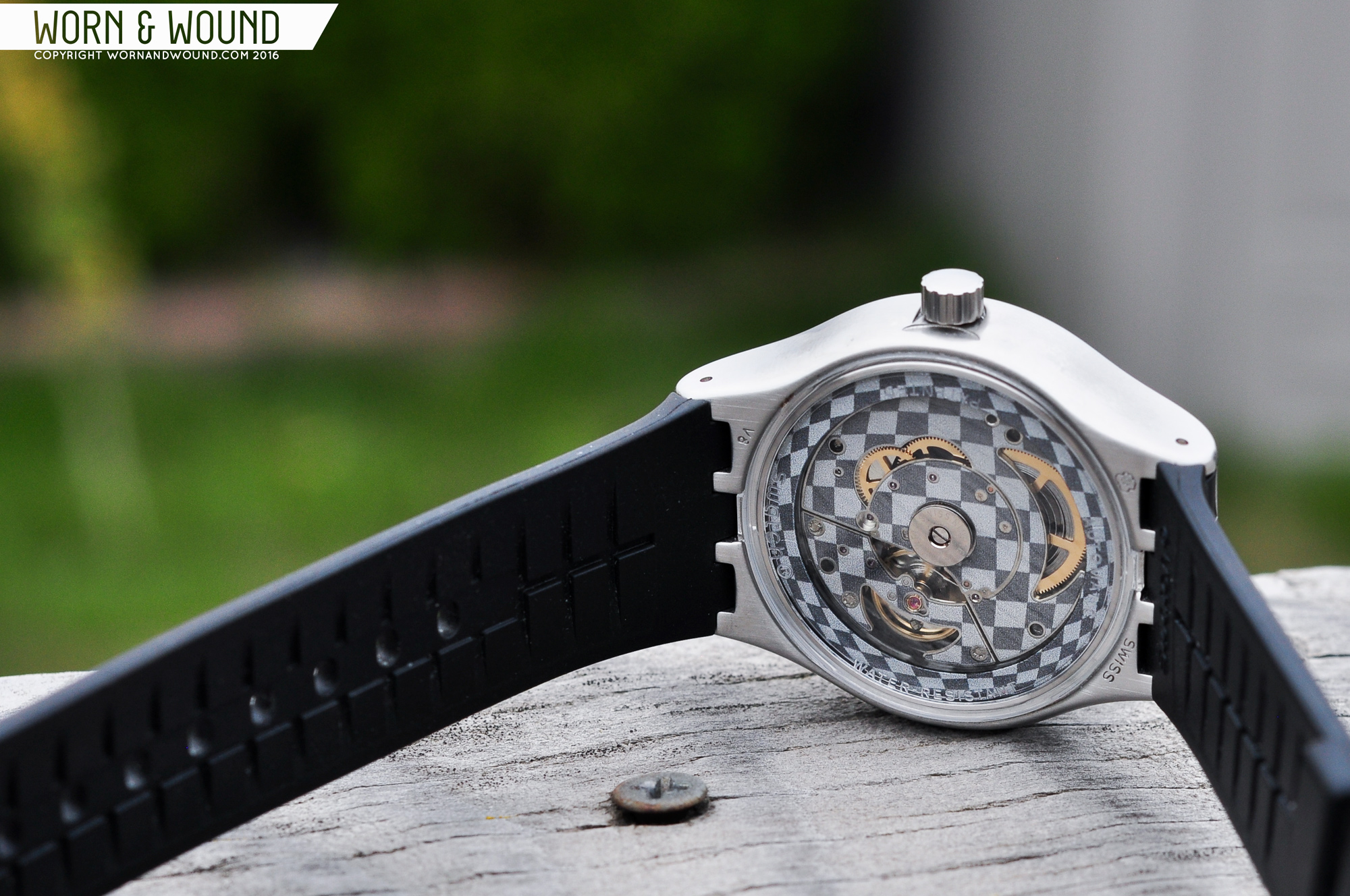 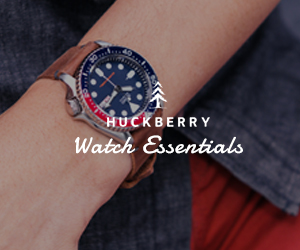 As mentioned above, the Arrow is styled after Flieger Type B watches. There’s a large outer ring for the minutes, and a smaller index toward the center for the hours.  The hands are simple swords for the hours and minutes, and a needle for the seconds. The hour hand is bit too long, with the tip going well past the hour ring. A weird faux-pas, but something tells me that Swatch wasn’t aiming for historically functional accuracy.

The Arrow comes on a rubber strap featuring a striped pattern. It is a thicker rubber strap but is still quite flexible and very comfortable on the wrist. The buckle feels solid and is signed with “Swatch.” I wasn’t sure initially how I felt about a rubber strap on a pilot-style watch, but after wearing it for a few days and finding the strap as comfortable as I did any reservations went out the window. 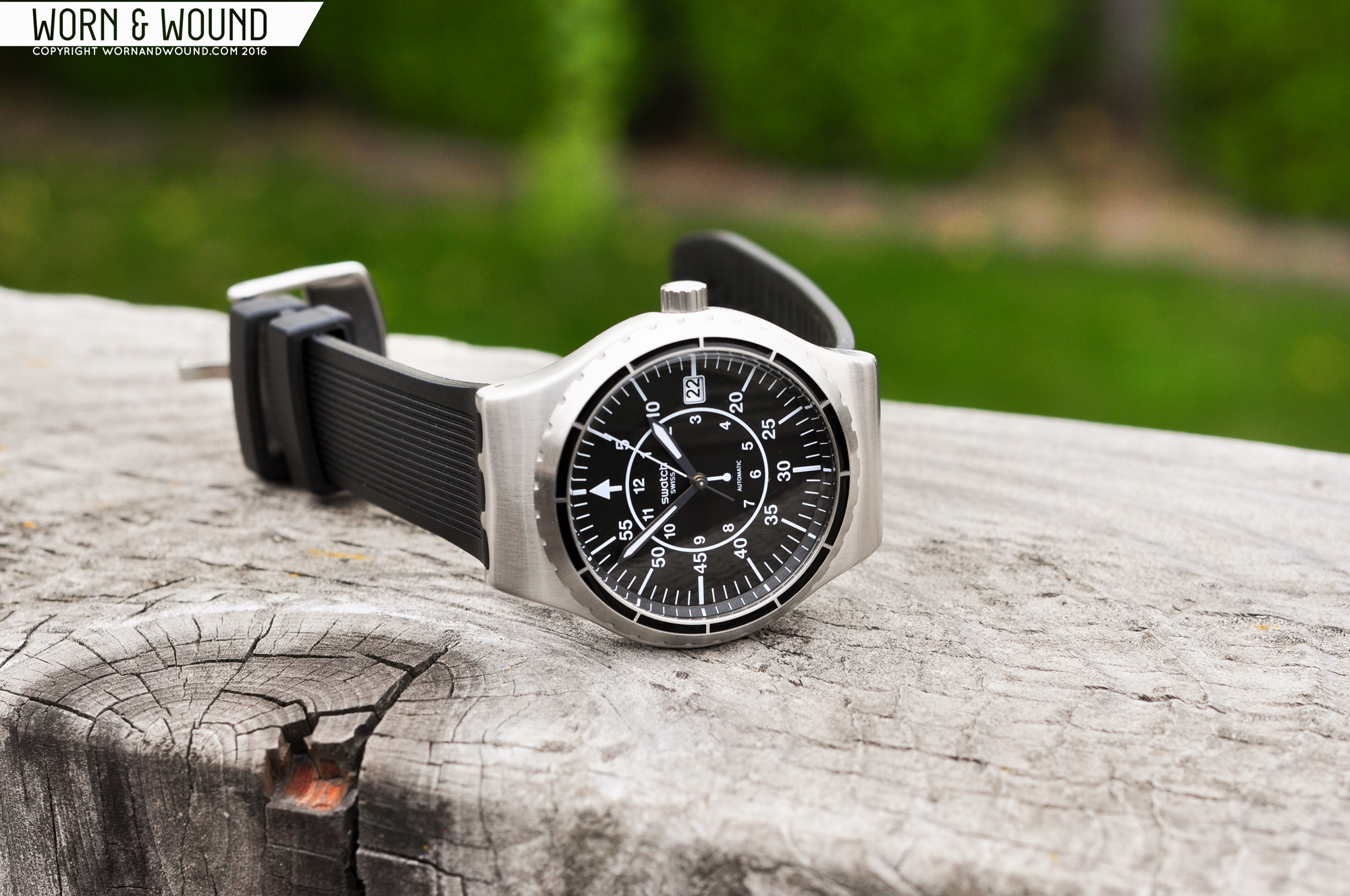 All in all, the Swatch Sistem51 Irony Arrow is a great looking, moderately sized pilot’s style watch with a really interesting movement, now made even better since it can be serviced. For $195, the Arrow makes for a great alternative for a pilot-inspired watch for those on a budget.