Patek Philippe’s watch new Ref. 6301P Grande Sonnerie is your brand’s first wristwatch that”presents the grande sonnerie as the epitome of horological complications in its purest form,” complemented with a petite sonnerie and a minute repeater, a mix long-lived by watch collectors.
The Ref. 6301P Grande Sonnerie has a new 703-part movement, cased in platinum (44.8millimeter x 12mm) in addition to a black dial in grand feu enamel.
To do so, Patek Philippe watch has developed a brand new movement for a spin-off of this grade 300 of the famed Grandmaster Chime. Consisting of 703 components, the caliber GS 36-750 PS IRM is comparatively compact to the purposes it offers (diameter: 37 mm; elevation: 7.5 mm).
The 6 complications of this brand new Ref.
Grande sonnerie
Minute repeater
Movement power-reserve index
Strikework power-reserve indicator
Patek Philippe aquanaut watch outfitted the grade GS 36-750 PS IRM using two tandem-connected twin mainspring barrels, one for the moving train and another for its chiming mechanism. This configuration delivers a power book of 72 hours for the movement and of 24 hours for the strikework. Both twin mainspring barrels are wound together with the crown pushed and rotated clockwise to wind the moving train and counterclockwise to wind the strikework. The four mainsprings feature slip bridles to avoid overtensioning.

“Due to the energy saved in the double mainspring barrel of this strikework, this adds up to an impressive amount of 1056 strikes in 24 hours.”
Patek Philippe
Patek chosen for three classic gongs — low, medium, high, a choice that traditionally requires greater energy than systems with two gongs. The hours have been struck on a low-pitched gong, the quarter hours using a three-strike high-lowmedium sequence. The tune for the first quarter hour (15 minutes) sounds after, for the second quarter hour (30 minutes) twice and for the third quarter hour (45 minutes) twice. Each quarter-hour sequence is automatically preceded by the number of elapsed hours, and followed by the amount of quarter hours. Thanks to the energy saved in the twin mainspring barrel of the strikework, this adds up to an impressive total of 1056 strikes in 24 hours.

The proprietor may also choose the strikework mode petite sonnerie; it strikes the complete hours omits the repeat of those hours when striking the quarter hours. In the silence mode, the automatic time strike has been switched off entirely.
The choice of this strikework mode is performed using a slide switch at the caseband at 6 o’clock. The petite sonnerie style is on the left adjacent the grande sonnerie mode in the middle and silence on the right. 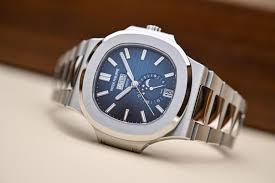 The selection of this strikework style is performed with a slide switch at the caseband at 6 o’clock. This patented feature was developed for the Longines Record watch Grandmaster Chime and enables the selection and activation of the strike mode with a single slide switch. On petition, the minute repeater could be triggered by pressing the pusher in the crown at 3 o’clock.
Patek has also added a little jumping minutes display, which was never done using a grande sonnerie. Its system doesn’t depend on jumper springs as usual but rather with wheels and a release lever which immediately unblocks the wheel rail each second, making energy intake a lot easier to regulate and control. 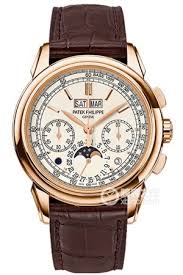 One of the greatest challenges was the integration of a little jumping seconds display at 6 o’clock, something which was never achieved with a grande sonnerie. According to the four patents of the 175th-anniversary model, the Ref. 5275 Chiming Jump Hour, the 6301P doesn’t rely on jumper springs as usual but rather will come with wheels and a release lever that instantaneously unblocks the wheel train each second, making energy consumption a lot easier to regulate and control, according to Patek.
The new Ref. 6301P is part of the brand’s regular collection (although its sophistication limits production to a few pieces annually ), price upon request